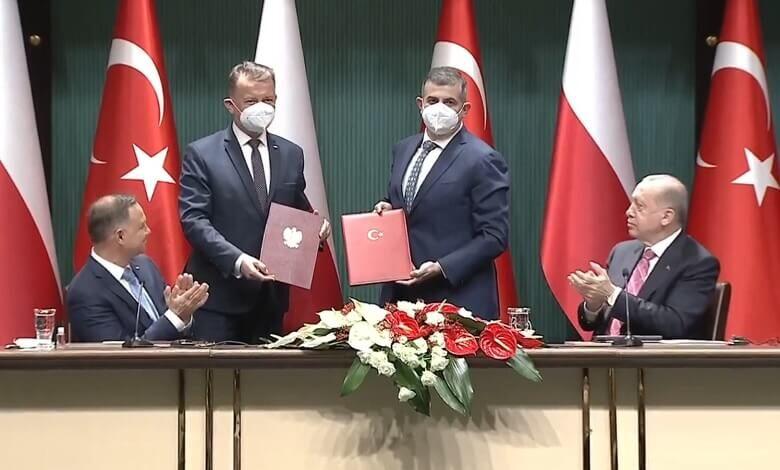 Turkey's first national and indigenous UAV Bayraktar TB2 will be exported to Poland. The agreement on export was signed by General Manager of Baykar Haluk Bayraktar and Minister of Defense of Poland Mariusz Blaszczak in the presence of President of the Turkish Republic Recep Tayyip Erdoğan and President of the Republic of Poland Andrzej Sebastian Duda at the Presidential Complex.

The Bayraktar TB2 UAVs, which have broken grounds in the history of Turkish aviation, after flying in the skies Ukraine, Qatar and Azerbaijan will also fly in the skies of Poland. Thus, for the first time, Turkey will have exported a high- technology armed unmanned aerial vehicle to NATO and European Union (EU) member country.

24 Bayraktar TB2 UAVs to be exported

Within the scope of the agreement made with Poland, the 4 systems to be exported from Turkey, will include ground control stations (GCS) and ground data terminals (GDT) along with 24 Bayraktar TB2 UAVs. In addition, MAM-C and MAM-L mini smart ammunition, developed nationally by Roketsan and used by national UAVs, will also be exported to Poland.

320 thousand hours in the sky

The Bayraktar TB2, being designed and developed nationally and authentically by Baykar, proved to be the best in its class worldwide in terms of technical features and operational performance, and also surpassed 320 thousand hours of successful flight. National UAVs continue to carry the title of a national aerial vehicle that has served the longest time in the sky.

The Bayraktar TB2 UAVs first entered the inventory of the Turkish Armed Forces (TSK) in 2014. The unmanned aerial vehicle, which was armed in 2015, is used operationally by the Turkish Armed Forces, Gendarmerie General Command, General Directorate of Security and National Intelligence Service. Since 2014, the Bayraktar TB2 UAV has been actively used by security forces in its fight against terrorism within the national territory as well as beyond it. Currently, 180 of the Bayraktar TB2 UAVs, which are present in the inventory of Turkey, Ukraine, Qatar and Azerbaijan, continue to be in service.

The localization rate at a record level

Since the early 2000s, having the team of Turkish engineers Baykar has nationally and indigenously developed the software and hardware systems, which are known to be the biggest added value in the field of unmanned aerial vehicles, and is shown as one of the world's leading technology companies, possessing engineering power in 13 different disciplines of the field. All critical components such as the design and software of the Bayraktar TB2 UAVs, which are manufactured with a worldwide known record level of 93% of domestic industry participation, are developed nationally and authentically by Baykar.

The Bayraktar TB2 UAV system, being the first UAV system exported by Turkey, is followed by the world aviation and defence industry with high interest. The operational success in the countries where the national UAVs are being operated, also enabled the export of the advanced aircraft to NATO and EU member country, which takes place for the first time in the history of the Republic. Within the scope of the agreements made, at first, the Bayraktar TB2 UAVs were exported to Ukraine, a country with a long history of 100 years in aviation which produces the world's largest aircraft - the Antonov cargo aircraft, and afterwards to Qatar and Azerbaijan. Now the UAV will continue to serve in Poland, a country that is one of the largest economies of the European Union.

Last year, most of Baykar's revenues were derived from exports abroad. Baykar, which made its first export of national UAV in 2012, achieved great success in such a strategic field as the defence industry with the 360 million dollars of (armed) UAV system export in 2020. Negotiations continue with many countries that are interested in national UAVs.

The Bayraktar TB2 UAV improved its own record, flying continuously for 27 hours and 3 minutes in tough geographical and climatic conditions such as high temperature and sandstorm when participating in a demo flight in Kuwait on July 16, 2019. National UAVs operate in all unfavourable weather conditions such as desert heat, freezing cold, snow and storm which they have faced in Qatar, Syria, Ukraine and Karabakh. With an altitude of 27,30 feet, the national UAV also broke the Turkish altitude record in its class in Turkish aviation history.

National UAV Bayraktar TB2 played a role of a playmaker in the Trench, Euphrates Shield and Olive Branch operations carried out by the Turkish Armed Forces in and beyond the border. Defence experts stated that one of the most important factors in ending the operations in a much shorter time than expected and experiencing fewer losses was the usage of national UAVs. The armed UAV systems of Bayraktar TB2 made more than 90 per cent of all flights during Olive Branch Operation in Afrin and left their mark in the operation with 5 thousand 300 hours of flight.

Watching over the Blue Homeland

Bayraktar TB2 UAVs that participated in many operations against the terrorist organization such as Claw and Pangolin, also played an important role in the operations carried out against the so-called directors of the terrorist organization sought on the Red List. National UAVs also take part in the protection of the Blue Homeland. In this context, “Fatih” and “Yavuz”, operating in the Eastern Mediterranean Region, accompanied our drilling ships by air for security. Bayraktar TB2 UAV, which took off from Dalaman Naval Air Base Command and landed at Geçitkale Airport on December 16, 2019 to be deployed in the TRNC for performing the same tasks, completed a historical flight.

Operating during the earthquake

Bayraktar TB2 UAVs were transferred to the region in a very short time, approximately 25 minutes after the 6.8-magnitude earthquake in Elazig Sivrice that occurred on January 24, 2020, and transmitted video information from the points where transportation was difficult to Ankara and command centers of the province where the earthquakes occurred. Bayraktar TB2 UAVs not only supported the search and rescue operations from the air, but were also used to control the heavy vehicle traffic after the earthquake and to ensure the further aid without any interruptions.

Forest fires and rescue of migrants

Bayraktar TB2 UAVs were involved in fighting forest fires, as well as in providing security and performing humanitarian aid duties. Operating under the direction of the Ministry of Agriculture and Forestry, the national UAV also played an important role in the protection of our forests by flying 24/7 against the danger of fire, monitoring 3.5 million hectares of forest area. Bayraktar TB2s will continue to work against forest fires this year as well.
National UAVs, which follow the ongoing illegal migration movements in the Aegean and the Mediterranean from the air, also contribute to the saving of many illegal migrants' lives and to the documentation of human rights violations.

Admired around the world

Bayraktar TB2 UAVs, which contributed to the success of the Turkish Armed Forces by increasing their reconnaissance and surveillance capabilities in Operation Peace Spring, also successfully destroyed many targets during the operation. Finally, for the first time in Operation Spring Shield, it flew as a swarm and destroyed many armored vehicles, howitzers, multi-barrel rocket launchers (MBRL) and air defense systems.
Bayraktar TB2 UAV, for the first time in the world, performed 80 percent of all sorties made by aircraft participating in Operation Spring Shield, in which UAVs were used as the primary element in the battlefield.
Bayraktar TB2 UAVs, which were successfully engaged in the scope of the operation in Idlib, Syria, flew over 2 thousand hours despite all kinds of electronic warfare. For the first time in the history of world warfare, Bayraktar TB2 UAVs flew in fleets and actively served in the operation which caused great resonance in the world press.

Bayraktar TB2 UAVs also played an important role in ending the Karabakh occupation of our fraternal country Azerbaijan, which had been going on for nearly 30 years. Azerbaijan launched a military operation against the Armenian occupation of Nagorno-Karabakh on September 27, 2020. On November 10, 2020, 44 days after the start of the operation, the Azerbaijani Army took control of Nagorno-Karabakh, ending the Armenia’s occupation. During the operation against Armenia, the Azerbaijani Army used Bayraktar TB2 UAVs which were developed at the national and indigenous level by Baykar, along the entire front line. According to the studies confirmed by defense analysts, many air defense systems, radar systems, tanks, armored vehicles, trucks, arsenals, positions and units of the Armenian Army were destroyed with Bayraktar TB2 UAVs. This success of Azerbaijani Army, which surprises the world, has been interpreted by the world media and defense experts as changing the warfare history of Turkish UAVs and achieving the playmaking power. Experts also drew attention to the fact that the Karabakh War was the first war in the history of world warfare won by UAVs.

Approximately 40 separate computer systems work on Bayraktar TB2, the robot aircraft developed by Baykar with national and indigenous design, software, avionics and mechanics.  Bayraktar TB2 UAV system, which has fully autonomous taxi, take-off, navigation and landing capability with its triple redundant avionic systems and sensor fusion architecture, has been actively used since 2014.  Bayraktar TB2, which can carry on its wings 4 MAM-L and MAM-C missiles produced by Roketsan, has the capability of precise targeting with its built-in laser target designator. With these features, Turkey stands out as one of the 6 countries in the world that produce their own armament and ammunition in the world.  National UAV draws attention as a system that offers an all-in-one solution with a quick see-and-strike feature in order to prevent damage to areas close to the target. Designed for the Turkish Armed Forces, the system provides reconnaissance, constant aerial surveillance, target detection and destruction.